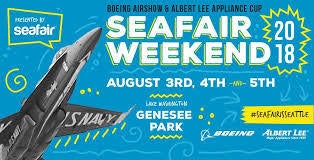 Seafair is a great time in Seattle and brings a fun-filled weekend for people of all ages .  However, fun and drinking on the water also comes with increased attention from law enforcement.  Multiple law enforcement agencies, including the Washington State Patrol, Coast Guard, King County Sheriff's Office, and multiple city police agencies, will deploy officers on the water as part of a boating under the influence (BUI) patrol.  In fact, they will treat the weekend as almost a contest to see who can arrest the most boaters they believe are under the influence.

The best advice we can give you is to make sure that operators leave the drinking and/or marijuana use to others; however, if you are detained, you should keep in mind that BUI is a gross misdemeanor crime.  If you are contacted by law enforcement when you have been boating after/while drinking, you should exercise your Fifth Amendment right to silence and ask to speak with an attorney.

Operation of vessel in a reckless manner—Operation of a vessel under the influence of intoxicating liquor, marijuana, or any drug—Consent to breath or blood test—Penalty.